Ireland, June 14, 2021 - (ACN Newswire) - GBA Ireland, led by Jillian Godsil and Lisa Gibbons, is to host its first event in Ireland on the topic of Blockchain and Identity. The event will be held on Thursday June 24 at 2pm (Dublin time) on Zoom and while it is free, registration is required - please see the link: https://www.eventbrite.ie/e/sovereign-identity-in-a-blockchain-world-solution-or-revolution-tickets-158123362233 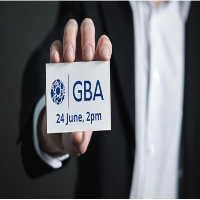 (firmenpresse) - The topic of Identity will be explored by three guest experts in this field and hosted by international blockchain expert, journalist and senior editor at ITN, Simon Cocking.

"Blockchain technology can help to protect sensitive information. With the power of blockchain based identity we can transform how our data is used across many industries: finance, banking, travel and healthcare are just a few industries that can use this break-through technology," says Simon.

"It can help to map your physical identity to your digital footprint, allowing for reduced checks for proof of identification and enabling easier management of records and certificates.

"Think about your online banking, when you want to upgrade your insurance, filing your taxes, booking flights, scheduling medical appointments: these processes become seamless with the use of blockchain technology," he added.

"Digital Identity has the power to fundamentally change people's lives for the better but it is not without risks. What is at stake is your privacy, your financial security and ultimately who you are as person. Are we ready for it?," says Rob.

Details on the guests are below:

Rob is a World Economic Forum Technology Pioneer. He has been leading the charge for the last 10 years to bring zero knowledge proofs and other Privacy Enhancing Technologies into mainstream use which is now happening with many different blockchains.

Shiv is a global thought leader in the identity and blockchain space with over 16 years of industry experience. He has been a keynote speaker at various international conferences, including at US capitol and UK parliament. He is also leading government blockchain association in UK & Europe.

Since 2018 Adam Bouktila has been involved in multiple blockchain projects and initiatives. Adam is the founder and CEO of dMerch.io, an NFT agency service that helps businesses, brands and artists build their digital strategy and provide unique content to their communities. Adam is also a member of the founding team at Europechain.io, an enterprise blockchain service provider with a number of tools and solutions geared towards reducing complexity and lowering the barrier to entry to blockchain. Adam is also a member of the management team of eos Dublin, a blockchain infrastructure provider which supports multiple different chains.

Paula Mare Kilgarriff is a Global Retail Innovation and Emerging Technologies lecturer at Technological University Dublin, Programme Director of Alsessor AI Accelerator by Altada Technology Solutions and Tangent Trinity College Dublin and a member of Blockchain Startup group Ireland. Paula is involved in multiple blockchain and AI/XR/VR projects in the Hospitality, Retail & Fin-Tech sector and has returned from China in 2019 after working in the in the international Luxury Fashion & Lifestyle eCommerce industry.

Simon Cocking has been Chief Editor at Irish Tech News, CryptoCommonwealth, CryptoCoinNews and InvestInIT - with over 1.5 million+ unique monthly views and growing. He was top ranked member of the "People of Blockchain" based on total funds raised & also #1 ranked advisor on ICO Holder. He is a business mentor and advisor working with over 200 successful companies to date. He has been named on many global Twitter influencer lists in the last 12 months, and has over 117,000 followers on Twitter & 30,000+ on Linkedin. He is an accomplished public speaker at events including TEDx, Web Summit, and overseas in Monte Carlo, PyeongChang, Amsterdam, Dubai, Delhi, Kiev, Singapore, Moscow, Tel Aviv, Madrid, Tbilisi, Riga, Porto, Dublin and Helsinki.

He was also the first person to be inducted into the Irish Ultimate Frisbee Hall of Fame. He has been based in Ireland for over 25 years and has co-founded or founded seven successful companies.

Washington, D.C., Aug 3, 2021 - (ACN Newswire) - In April 2019, during the Guatemalan election, the people of Guatemala suspected that voting fraud had occurred. Since additional elections were scheduled for August 2019, citizens wanted assurance tha ...